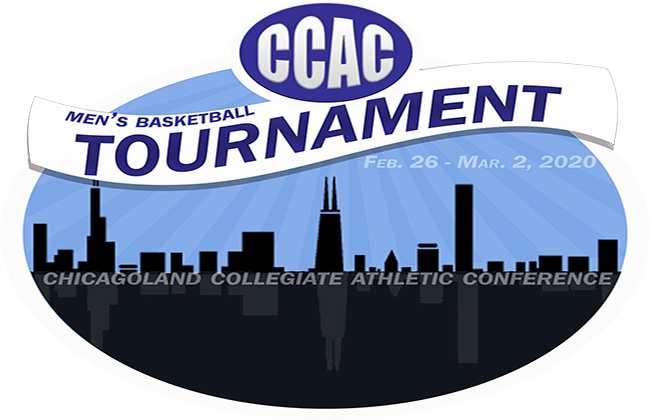 ONU, HCC Teams To Beat In CCAC Men’s Basketball Tournament
CHICAGO — After 22 league games, the Chicagoland Collegiate Athletic Conference men’s basketball regular season could not determine a clear cut champion with both NAIA No. 4-ranked Olivet Nazarene University and No. 11 Holy Cross College claiming a share of the crown with identical 20-2 marks.  So, that leaves the next three games over the course of the next nine days in the CCAC Tournament to make that determination.  Or, will it?

While those two schools are the leading candidates to meet for the CCAC Tournament title next Monday night based on both finishing four games ahead of the next closest contender, there are six other teams determined to break up that potential matchup when the 2020 league tournament tips off Wednesday.  Eight teams in all make up the single-elimination tournament field.

One of those six that poses as an interesting matchup is No. 3 seed Indiana University South Bend (22-8).  The Titans were the only team during the regular season to solve both Olivet Nazarene (28-2) and Holy Cross (25-5), beating them both in South Bend by 79-60 and 74-66 counts, respectively.  On the road, IUSB fell by single digits to both teams.

While ONU and HCC tied for the regular-season crown, the former gained the No. 1 seed through a tiebreaker process, leaving Holy Cross to man the No. 2 slot.  What is interesting should both teams meet again next Monday is the disparity between their two regular-season encounters.  Back on Nov. 20 at McHie Arena, Olivet Nazarene thumped the Saints 94-62.  Two months later (Jan. 15) in South Bend, Holy Cross landed an 85-68 blow to the Tigers.

Joining the top three seeds as a first-round host on Wednesday will be No. 4 Saint Xavier University (19-10).  The rest of the field features No. 5 Robert Morris University Illinois (19-10), No. 6 Indiana University Northwest (17-13), No. 7 St. Ambrose University (16-14) and No. 8 Governors State University (17-12), all of which will be looking to put together a string of three straight upsets over the course of the next nine days.

First-round matchups on the top half of the bracket Wednesday will have Olivet Nazarene hosting Governors State and Saint Xavier doing the same against Robert Morris.  On the lower half of the bracket, Holy Cross hosts St. Ambrose and Indiana Northwest makes the short jaunt to Indiana South Bend.

Friday’s semifinal-round contests will feature the winner of the Olivet Nazarene-Governors State game going up against the winner of the Robert Morris-Saint Xavier contest and the two winners of the matchups between Holy Cross-St. Ambrose and Indiana South Bend-Indiana Northwest squaring off.  All second-round games will be hosted by the higher seed.

Monday’s title game will also be hosted by the highest remaining seed.

Unlike years past where the conference held two bids to the NAIA National Tournament, this year the allotment is three due to the fact that the league is now made up of 15 teams.  Thus, there is one bid for every five teams.

Two of the bids have already been claimed by the top two finishers during the regular season – Olivet Nazarene and Holy Cross – with the third berth going to the conference tournament champion.  If either Olivet Nazarene or Holy Cross also claim the tournament title, the third bid would go to Indiana South Bend as the third-place finisher during the regular season.