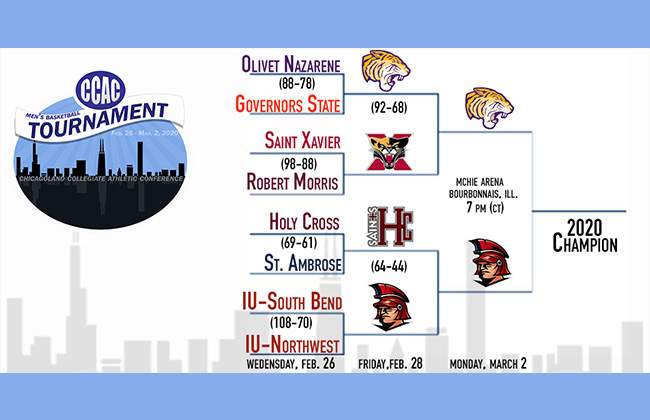 CHICAGO — The first upset of the 2020 Chicagoland Collegiate Athletic Conference Men’s Basketball Tournament came Friday night when Indiana University South Bend made the short trip to Notre Dame, Ind. and scored a convincing 64-44 victory over No. 2 seed and No. 9 nationally-ranked Holy Cross College.

Equally as dominant was top seed and No. 4-ranked Olivet Nazarene, which throttled Saint Xavier University 92-68.

Friday’s decisions not only set up Monday night’s title-game matchup between ONU (30-2) and Indiana South Bend (24-8), but also locked up the conference’s three national tournament qualifiers.  Olivet Nazarene and Holy Cross claimed their bids during the regular season by finishing in the top two spots of the final standings, while Indiana South Bend earned its spot by being in the title game along with ONU and finishing third during the regular season.

In their two previous meetings this year, Indiana South Bend posted a 79-60 win on Nov. 16 in South Bend before Olivet Nazarene evened the series with its 72-65 victory at home on Jan. 11.

Olivet Nazarene 92, Saint Xavier 68 — For just the third time in school history, Olivet Nazarene reached the 30-win plateau and did so with its 12th straight win and all five starters scoring in double figures.  Three of the five also registered double-doubles with Nic Reed’s 22 points and 11 boards, Alex Gross’ 20 points and 13 caroms and Dane Schlafley’s 10 points and 11 assists. Reed and Gross both converted nine of their 12 shots from the field as part of an overall 55 percent shooting effort for the winners.  Saint Xavier, which was led by Joshua Evans’ 25 points, converted at just a 34 percent clip.

Indiana South Bend 64, Holy Cross 44 — The last team to beat Holy Cross was Indiana South Bend way back on Jan. 4 and the Titans did it again on Friday, snapping Holy Cross’ 14-game string of victories.  Norell Smith sank six treys as part of a 21-point, 12-rebound night for him.  Teammate Donyell Meredith added another 12 markers.  Noel Mpie topped Holy Cross’ scoring column with 18 points to go along with seven rebounds.  Larenzo Moore turned in a double-double (13 points, 13 rebounds), as well, but the Saints as a team could never get anything going offensively, buoyed by a 33 percent shooting mark and just one three-pointer in 12 attempts.